How is September already almost over? The days are getting shorter. Hubby is falling asleep on the couch at 8:30 p.m. because it's so dark outside, but I do like the temperatures. I wore a long-sleeve shirt to an appointment yesterday and I was glad I did. It's that time of year when A/C is still cranked up inside even though outside it's only 72 degrees. 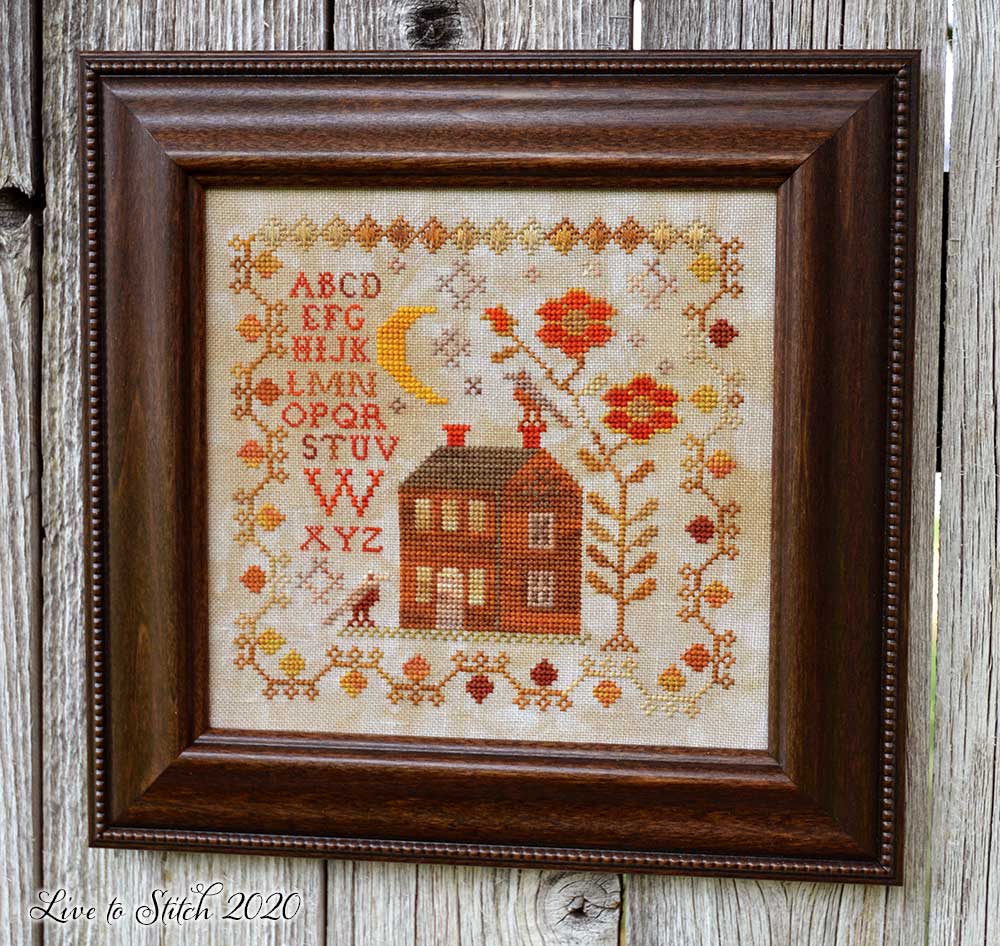 Have you ever stitched something you love, only to hate the finish? Aggravating, isn't it? You put so much work into something only to end up hiding it in a closet. That was the case for me with Bittersweet September by Blackbird Designs.

I stitched it last year. I loved the stitch and the autumn colors and the wonky way the "W" is bigger than all the other letters. (Why? Why not?) But when I put it in a thrift-store frame I had painted brown, it just looked blaaaahhh. So I put it away in the armoire for a year. I didn't know what to do to make it look better.

Franken Frames to the rescue! With a recent order, I made sure to get something for this sweet stitch. I love this frame. I think the walnut goes really well with the colors in the stitch, and I love the beaded edge.

Macintosh Mill was a Dimensions kit based on a painting by Charles Wysocki. I stitched this years ago, so long ago I don't even remember when. At the time, I wasn't doing any framing myself, and framing can be expensive. It seemed like there was always something more important to spend the money on. So I folded it up and put it back in the package with the kit and forgot about it.

Fast forward 10 years (or more!). I was purging my old cross stitch magazines when I found the kit and the completed stitch folded up inside. I ironed it and again thought about having it framed. Not in the budget. I put it in a plastic storage bin with other completed stitches and forgot about it again.

Fast forward a year, and here I am framing things myself! And here you have it... Macintosh Mill, framed and ready for fall. 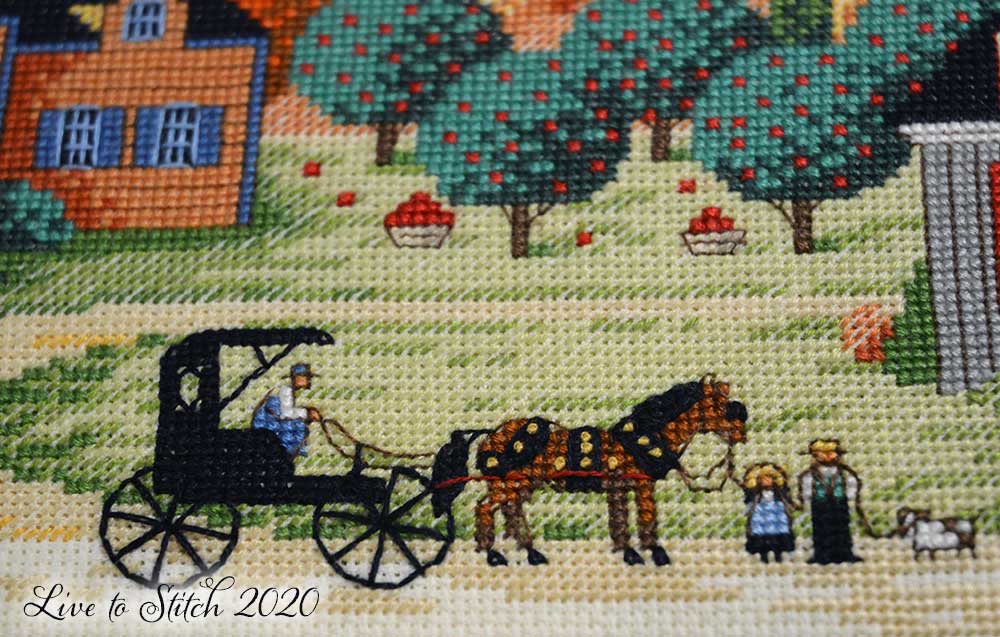 The horse and buggy, and the children and their dog (or goat?)... 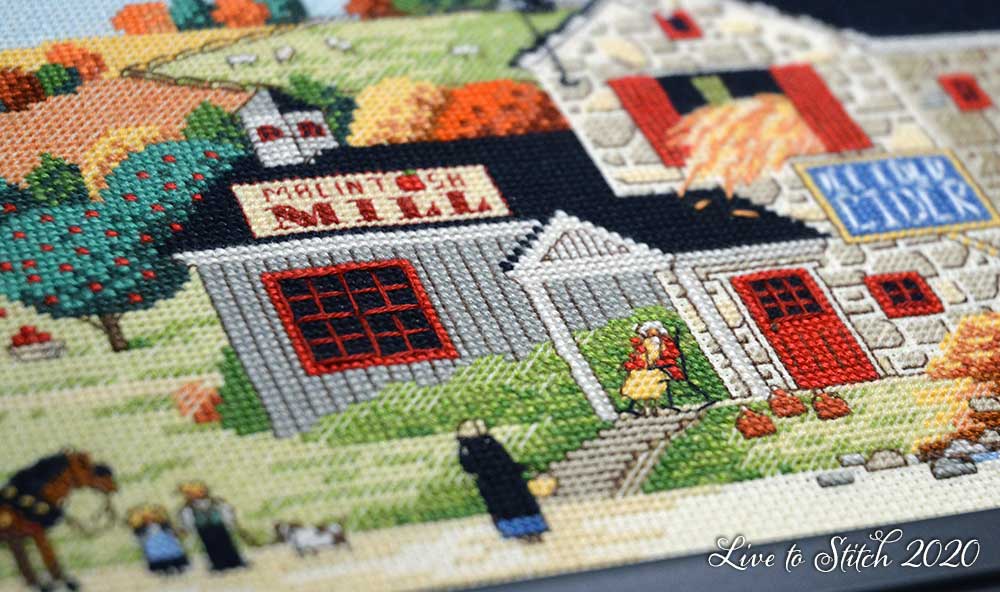 Rocking on the porch.... 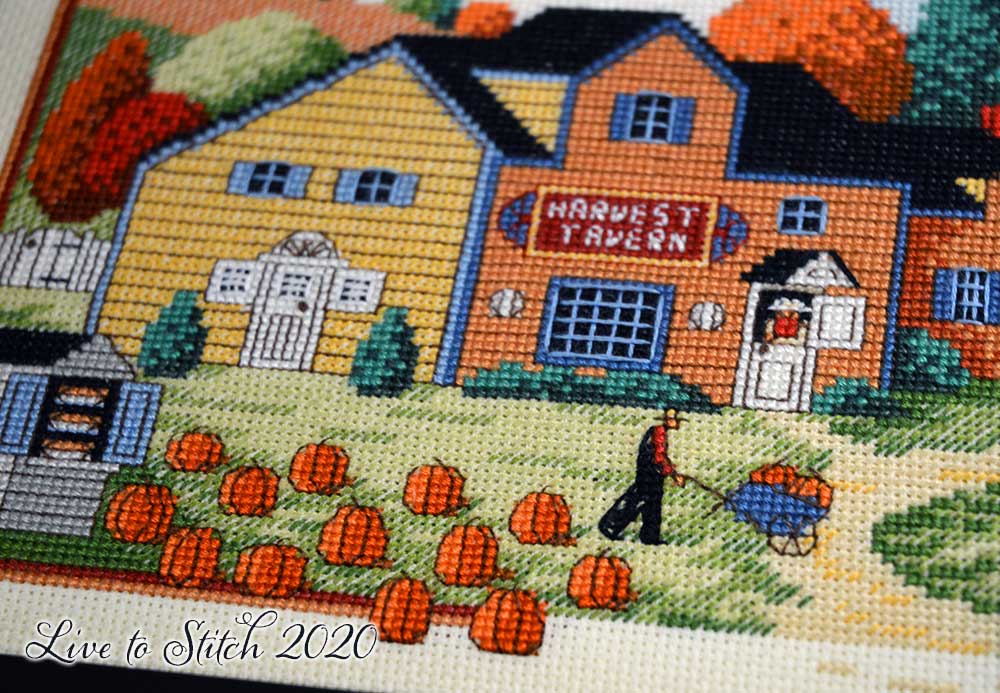 The pumpkin patch and pumpkin pies... 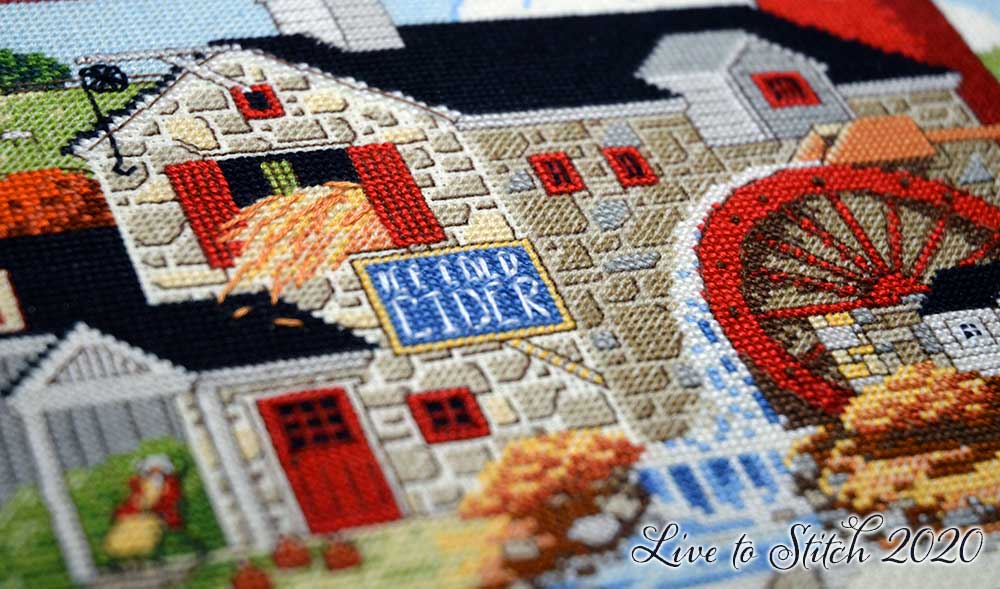 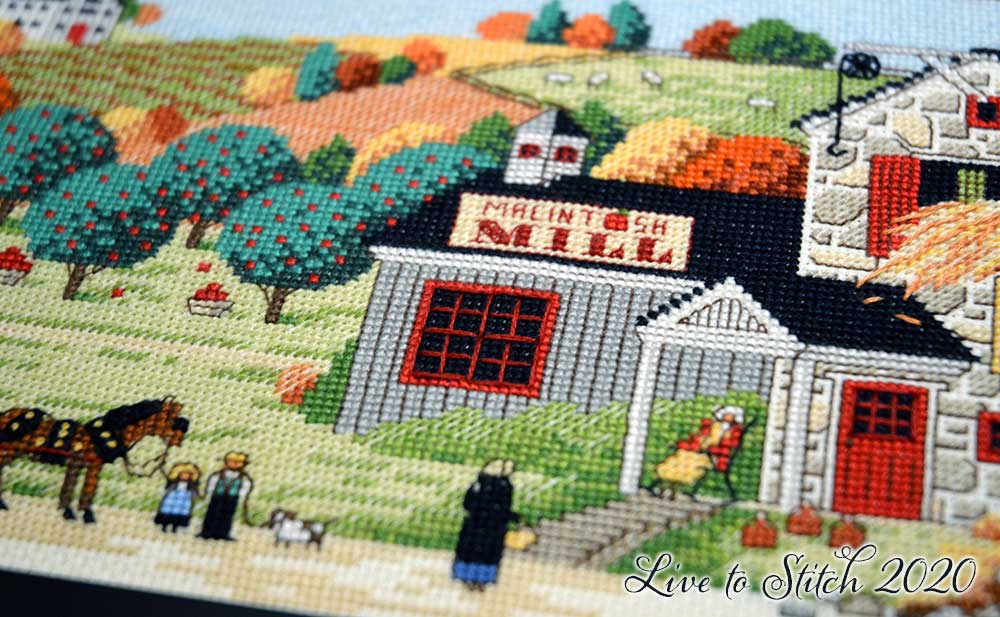 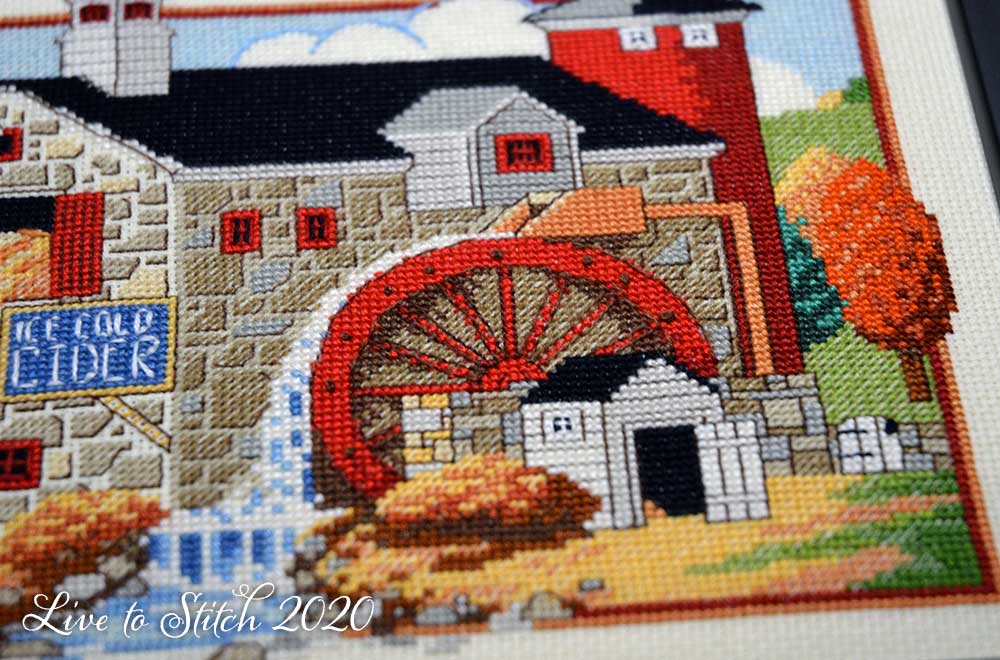 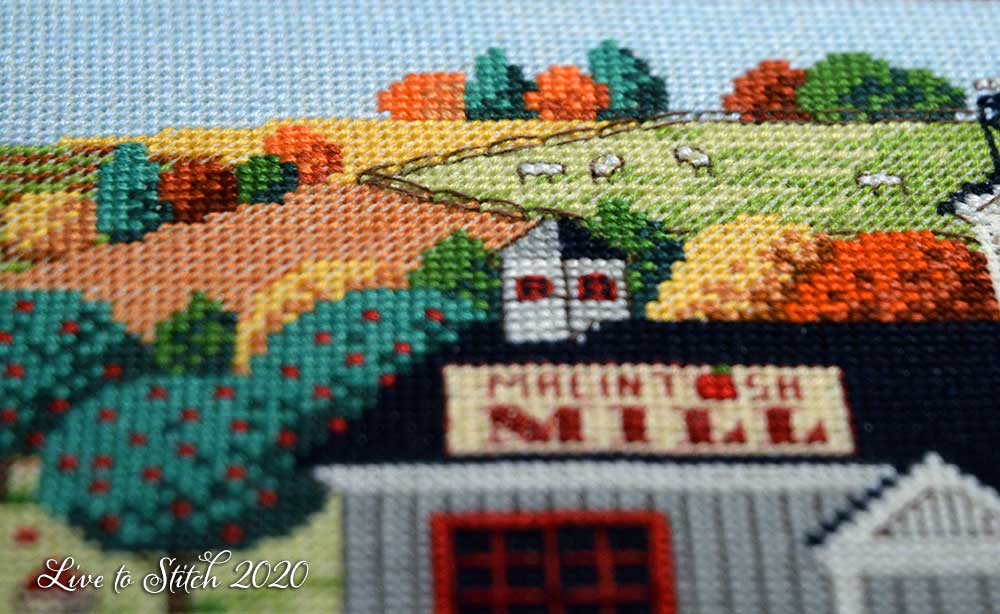 Sheep in the field...

Late summer turning into autumn, a bountiful harvest, my favorite time of year....

If you've been reading my blog for a while, you'll remember that last year my big project was Halloween at Hawk Run Hollow by Carriage House Samplings. I started in January and finished at the end of August. I've shown each block as I completed it but never the whole thing.

The plan was to have it framed and ready for the blog in October last year, but there was a major mix-up at the framer and I didn't end up getting the fully finished project back until after Thanksgiving! They had it for about three months (can you imagine?). Apparently there was some misunderstanding between the framer and the supplier with the moulding I chose and it sat on a cargo ship in a dock somewhere all that time. The framer felt so terrible about the whole situation that she framed it in a plain black frame so I could at least have it on the wall for Halloween. When the correct frame came in, she reframed it, but I didn't want to show you a Halloween stitch just before Christmas. 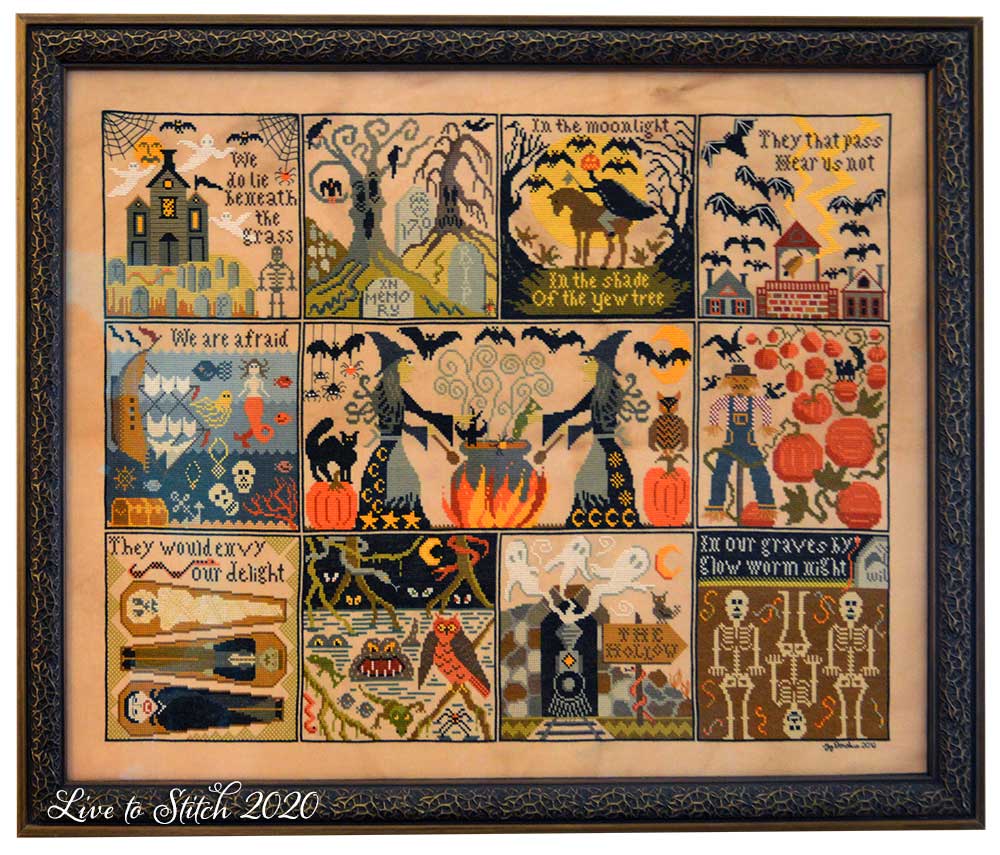 I am so happy with the final result. I think the frame looks like creepy vines, and it picks up the shapes in the tree limbs and roots, the pumpkin vines and the swamp. The photograph doesn't show it well, but it's a really pretty dark gold with black undertones. The second photo shows more of a closeup of the frame next to the pumpkin square. 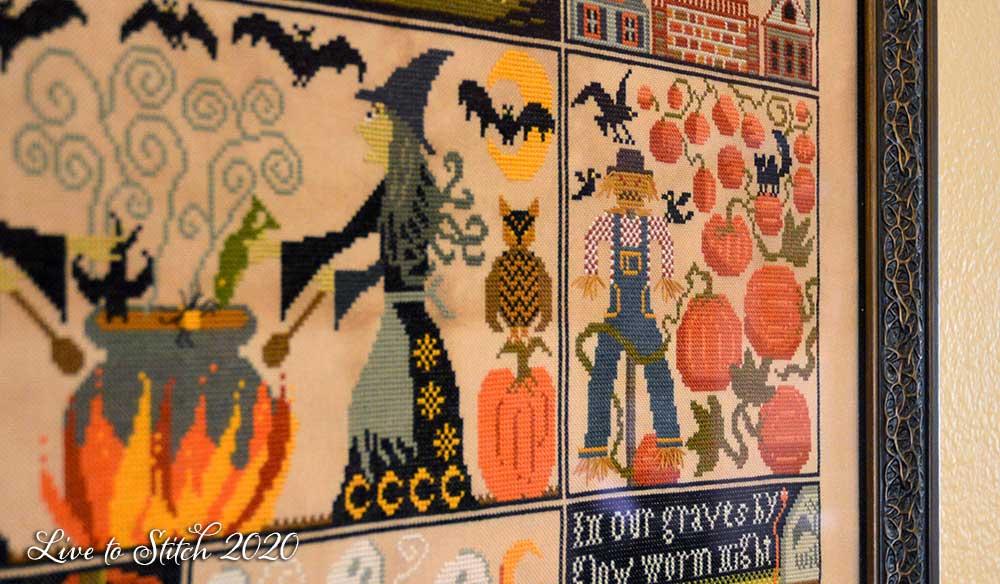 I hope you are staying well and continuing to do everything you can to keep yourself and the ones you love healthy. You are too important! Until next time... happy stitching!
at September 26, 2020 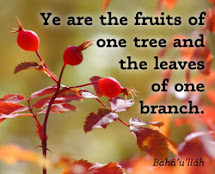