A Good Day to Have a Good Day

I am definitely late to the party. I promise... I have NOT dropped off the face of the earth! No excuses. Since my last post, one week became one month...two months...and then nearly three months....

But here I am! Thanks for hanging in there and not giving up on me.

Today was a good day to have a good day. I have been a homebody lately, which, truly, is who I am. But today I felt like getting out and enjoying some retail therapy.

Here's how my day went.

8:45 a.m.: Got up and ate a bowl of cereal while watching The Price is Right. I freakin' love this show, and have since I was little. Do you? 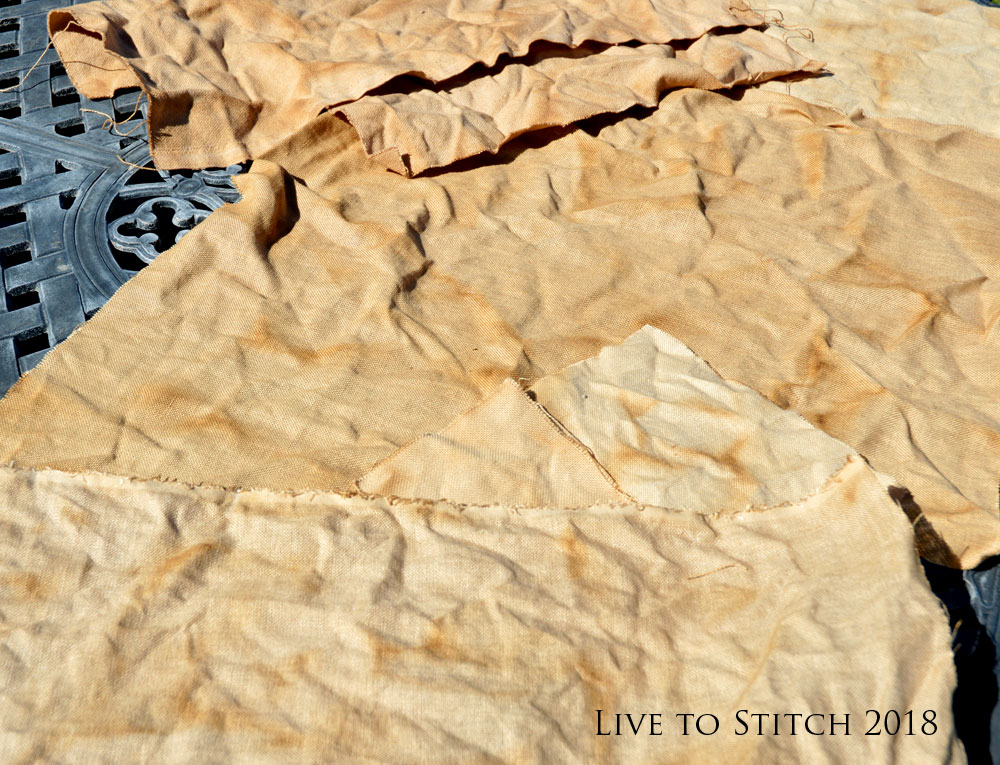 10:30ish a.m.: Dyed some linen from my stash using Priscilla and Chelsea's tutorial for coffee-tea-dyed linen. I wasn't using these pieces of linen because I didn't like the original colors. They were either blah or just a little too plain. I thought, If this doesn't work, I'm not in love with this fabric, anyway, so what have I got to lose? Well, let me tell you, I love the result!

The photo above shows my dyed pieces drying in the sun outside. After they were dry, I ironed them and put them back in their packages so I would remember what count they are. (I took good notes beforehand to help myself keep this straight.) I can't wait to use these! If you would like to give this a shot, you can't go wrong. Their tutorial is wonderful. 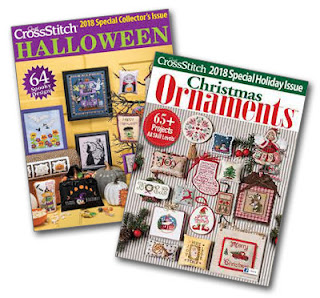 1:00 p.m.: Went to Barnes & Noble to pick up the 2018 Halloween and Christmas-ornament issues of Just CrossStitch magazine. I found the Halloween issue right away, but they didn't yet have the Christmas-ornament issue! Drats! So I was sitting on a nearby bench flipping through a few stitching magazines when an employee holding a stack of magazines said, "These just came in if you're interested."

The lady sitting next to me scoffed and said, "Uh, no thanks."

I looked up and what did I see, but the new Christmas-ornament issue. "Yes! I'll take one, please! That's what I came here for!" I said.

"Well, you waited just long enough," he said, and handed me my issue. I don't know if you've seen it yet, but there are some darling ornaments in it. I already have plans to stitch "Joy" by Livia Rovaris. (It's on the cover.)

When I paid for my magazines, they gave me a coupon for $2 off a drink in the café, and I haven't had Starbucks in sooooo long. When I was working full time, the Starbucks on my way to work was a fairly regular stop for me. My husband says he has no idea how they have managed to stay in business since I stopped working.

Sixty-five dollars later, I left the store with a full cart.

3:00 p.m.: I had some very sad-looking bananas to use up, so I made some banana bread. My go-to recipe lately is King Arthur Flour's Whole-Grain Banana Bread. You can find the recipe here. It's very good and very healthy as far as banana bread goes. No wonder they named it their 2018 Recipe of the Year!

4:00 p.m.: Time to start dinner. I had some leftover deli chicken in the fridge, so I made one of our favorite soups: Creamy Chicken and Wild Rice Soup. Another thing about fall... I love, love, love soup, and fall's chilly nights are perfect soup nights. What is your favorite soup? 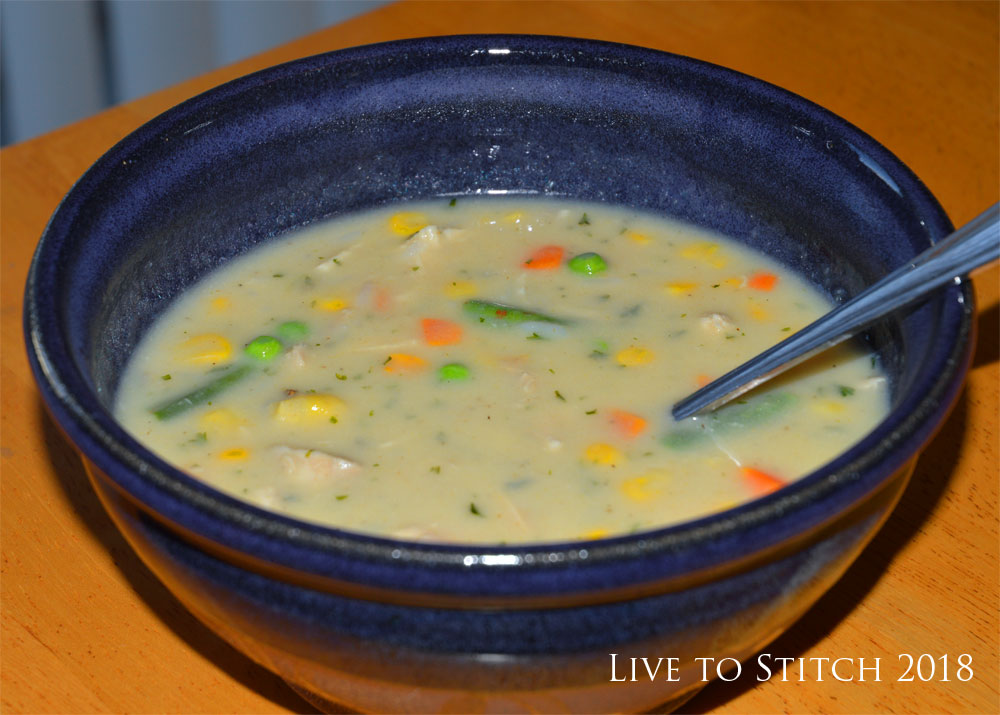 I found this recipe on Allrecipes.com originally, but I have modified it, so I will share my version of the recipe with you. It's so good.... so creamy and wonderful and soul-satisfying.

In a large pot over medium heat, combine chicken broth, water and chicken. Bring just to boiling, then stir in rice, reserving the seasoning packet. Cover pot and remove from heat.

In a small bowl, combine salt, pepper and flour. In a medium saucepan over medium heat, melt butter. Stir in contents of seasoning packet until mixture is bubbly. Reduce heat to medium-low, then stir in flour mixture by tablespoons to form a roux. Whisk in milk, a little at a time, until fully incorporated and smooth. Cook and stir until thickened, 5-10 minutes.

Stir white sauce into broth-rice-chicken mixture in pot. Add frozen vegetables. Cook over medium heat until heated through and rice is tender, about 15-20 minutes, stirring occasionally.

6:00 p.m.: My husband and I watched The Greatest Showman, which I had seen before and he had not. When I saw it the first time, my friend Jacquie took me. She had seen it six times already (!!!), but wanted to see it again. If you have not seen it, the music is wonderful.

8:00 p.m.: We baked some ready-to-bake, gooey Rhodes cinnamon rolls for dessert. We don't usually do dessert, but dang, they just sounded like a good idea. And they were....sooo good.

9:00 p.m.: I started taking pictures and composing this blog entry. Finally getting to share my day with you is the perfect end to a perfect day.

And now to the stitching!

I have been working on a lot of projects lately, but I have two I want to show you today. Both are little Halloween pillows. 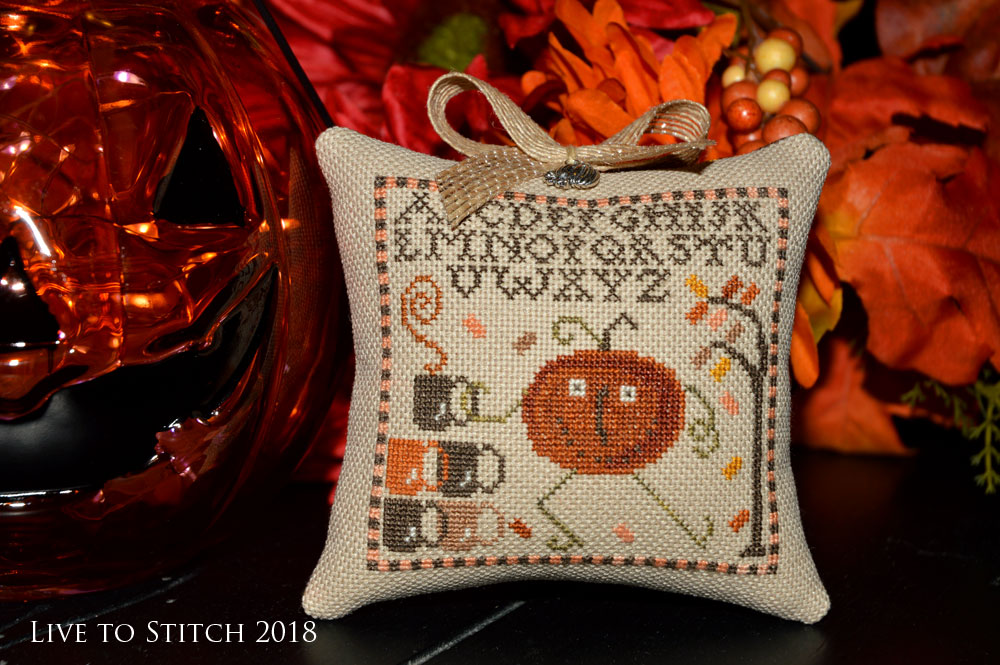 The first is "Brew Haha!" by Plum Street Samplers. It's a freebie, and you can find it here. I stitched it over one on 25-count mushroom lugana, substituting overdyed threads for some of the called-for DMC threads (I used the called-for DMC 3021, ecru, 3863 and 3826, but substituted Gingersnap, Pumpkin Harvest, Endive, Gold Leaf and Brandied Pears for the rest).

I sewed it into a very simple little pillow, topping it with a natural bow and a little pumpkin charm. I love this little guy! He looks like I do when I have my caffeine for the day! As I was stitching the pumpkin body of the little fella, I stitched in a circular pattern so the variegations in the thread would go round and round, rather than in stripes across his body. 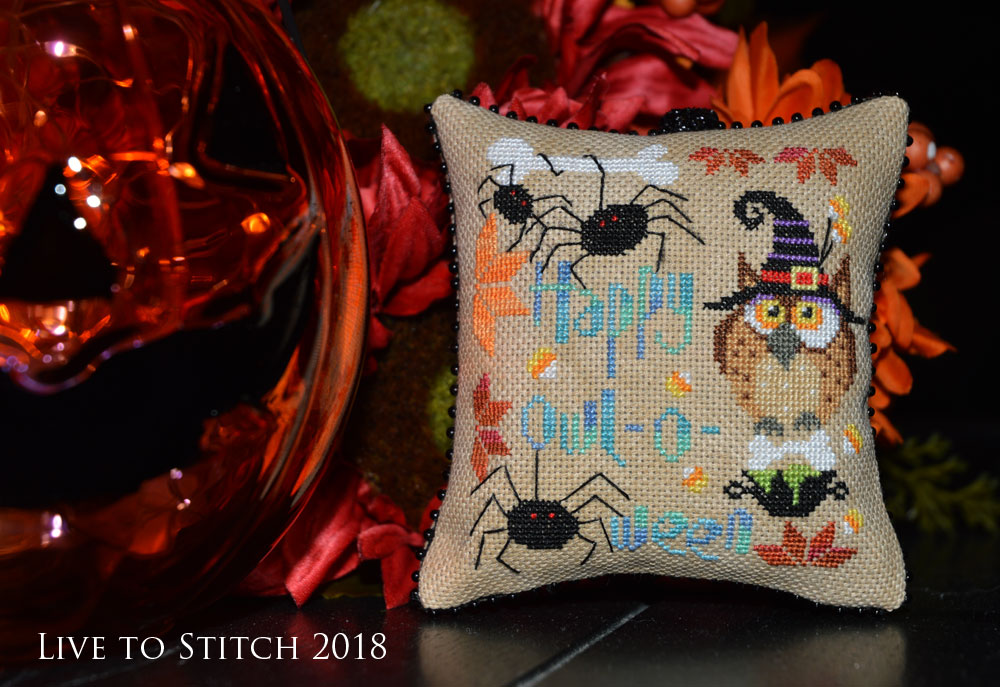 The second is "Owl-O-Ween" by Barbara Ana Designs. I bought this pattern online at Creative Poppy Patterns. I stitched it over one on 25-count vintage country mocha lugana. Isn't he cute? (He looks like he has had some caffeine, too!) I love the bright colors. I do not love the spiders (yuck!), but they are perfect for Halloween, and I have to admit, I like their beady red eyes. Creepy! 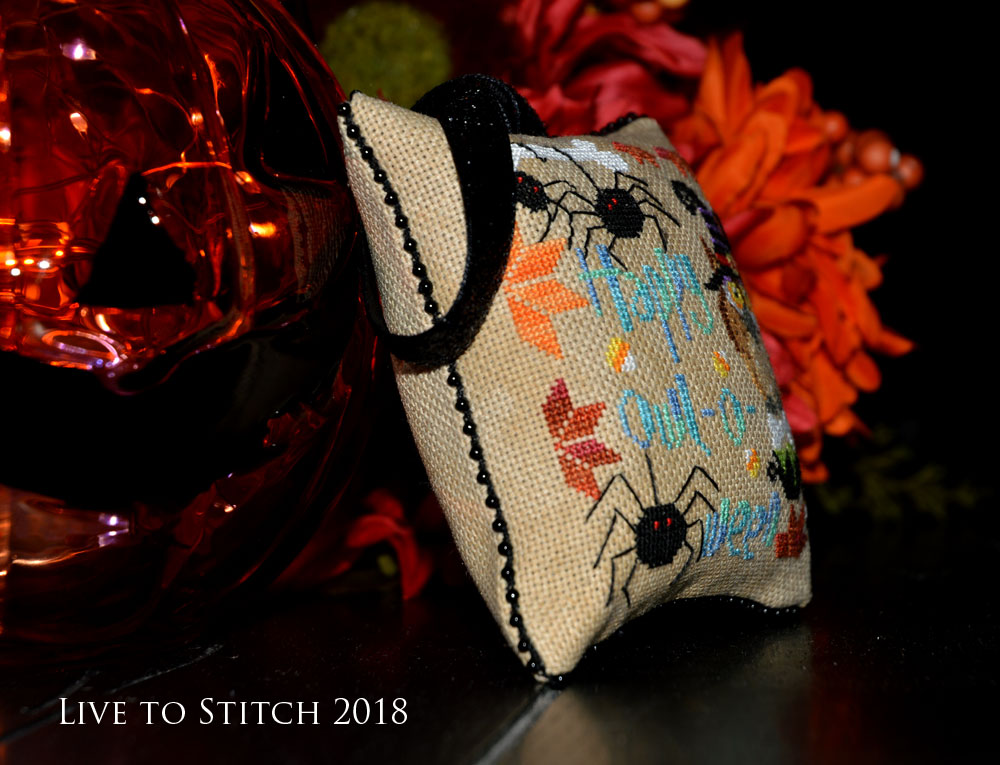 I finished Owl-O-Ween using Staci's beaded edge tutorial that Carol over at Stitching Dreams shared a while ago, and I added some sparkly black-velvet ribbon for a hanger. It was a lot of fun (although time-consuming), and I plan to use this edge-finishing technique a lot in the future. For one thing, it was all hand sewing, and I feel more in control of my finish this way. My sewing machine is a 1960s hand-me-down Singer Fashion Mate from my mother-in-law, and I am a little afraid of it, to be honest. My mom taught me some very basic stitches when I was young and wanted to make simple clothes for my Barbies, so for me, hand-stitching just feels more natural. I'm an odd duck, I know.

As always, friends, thank you for stopping by. I appreciate you so much!
at September 19, 2018