Oh, lord, don't even get me started on how long it has been since I wrote a post. I procrastinated for a few weeks, and then my former employer reached out to me to see if I would do some at-home typesetting for them during their busy season. I agreed, and a few weeks went by with nothing, then BAM. One day I suddenly had almost more work than I could handle. Being a workaholic at heart, I told them they could send me even more if they had it (glutton for punishment). And they did. So I am taking a break from stitching, framing and typing to finally sit down and write to you.

First, and definitely not late yet, is June Cottage, by Country Cottage Needleworks. Like the others in the series, I stitched this on 32-count lambswool linen with the called-for threads. (Except for the green... somehow I managed to forget to order that one, so I substituted DMC.) I have to say, I am anxious to finish stitching this series. It is getting a bit repetitive! 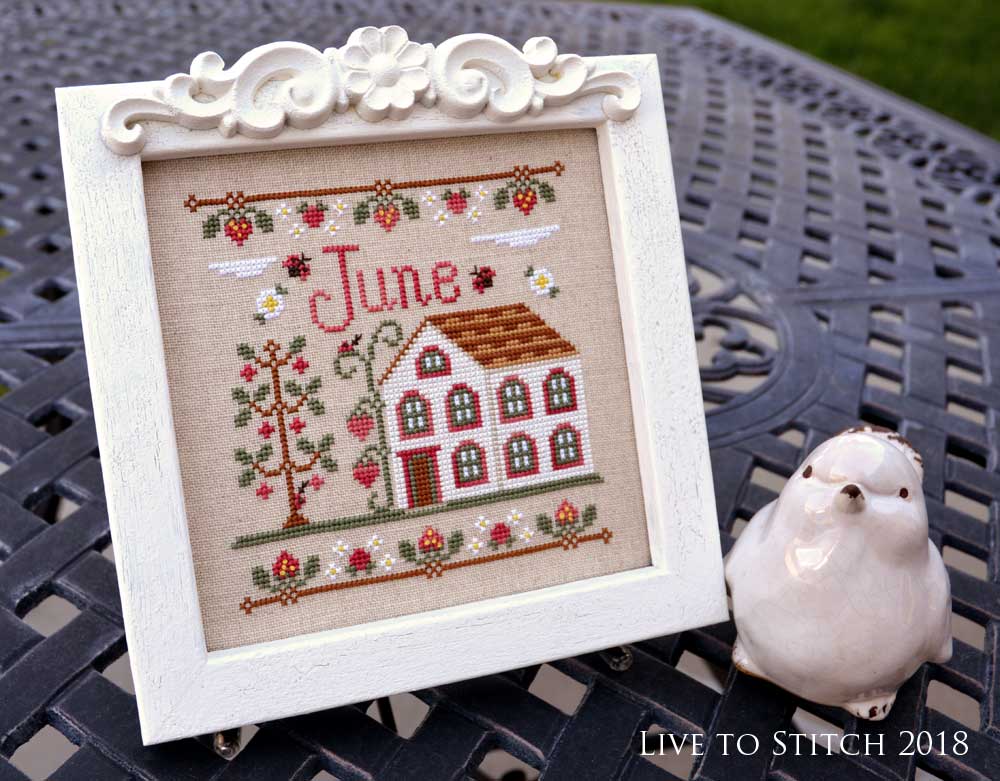 I changed the two little ladybugs on the vine and the tree. I added little antennae to them. It didn't make sense to me that the flying ladybugs would have them and the walking ones wouldn't. 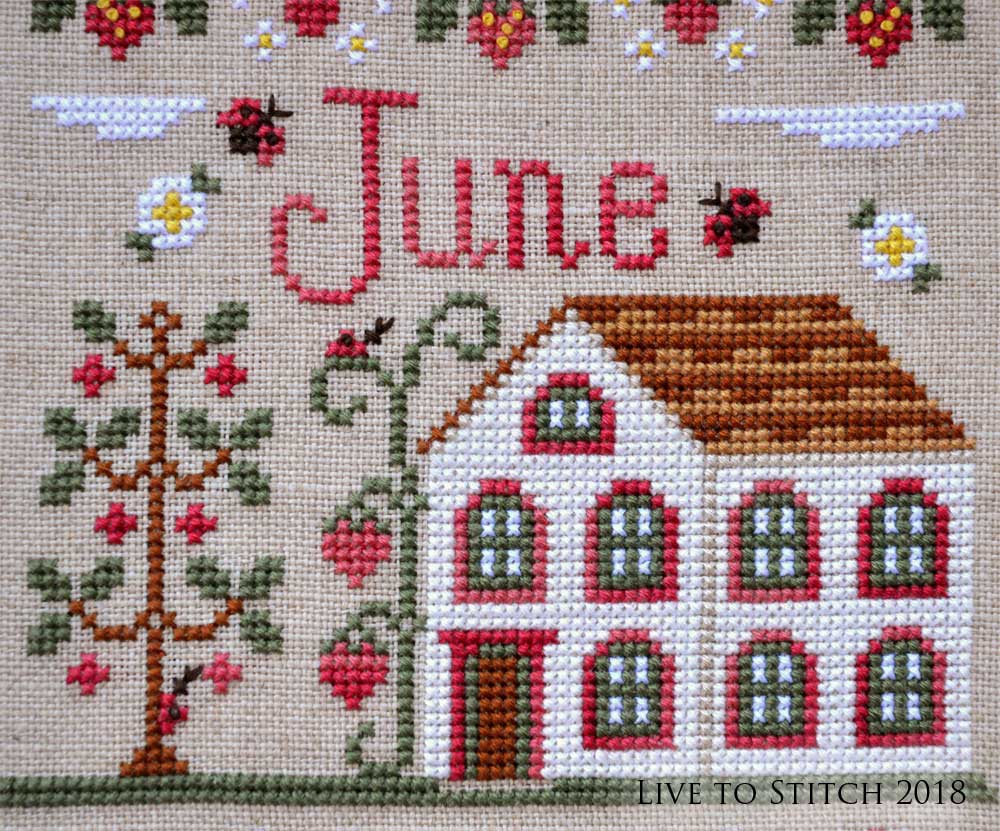 I started the series last October so I have July, August and September to go. I'm almost done!

Can I be honest with you? Summer is not my favorite season. I don't like to be hot and sweaty. I love fall, with the cool days and cold nights when a pot of stew warms our bellies and makes us feel good. My husband and son have gotten to the point where spring actually makes them feel depressed! For them, it's because that's when the days of ignoring the outside are over, and it's time to water, weed and mow. My husband has the added joy (misery) of getting water systems running and cattle ready to turn out on his mom's ranch in central Idaho.

On a positive note, I do love cooking outside and camping, so I will focus on that and stop complaining. 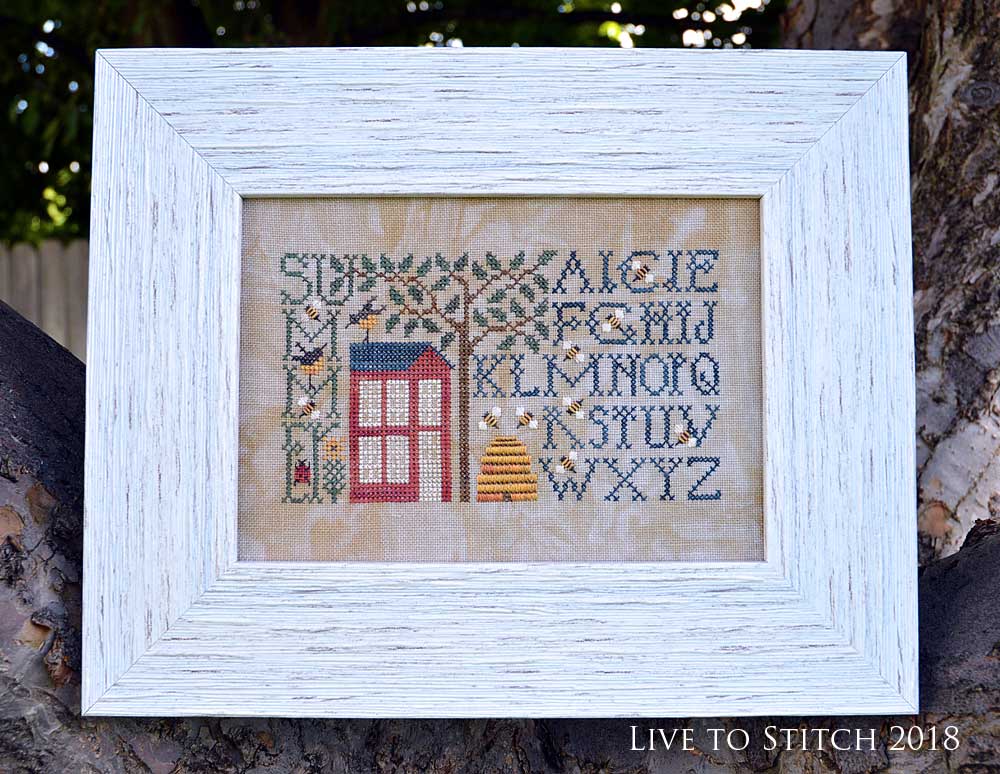 Yesterday, I put the final touches on "Simply Summer" by The Drawn Thread. I cannot tell you how much I love, love, love this pattern. From the one-over-one ladybug to the satin-stitched bees and bee skep, this was a joy to stitch. (OK... honestly, the bees weren't all that much fun to stitch, but look how cute!!!) If you click on the picture, it should open up a larger version that better shows the details. I stitched them on 32-count Wren by Picture This Plus with the called-for threads. I just adore this fabric, from the mottling to the weight and feel of it. I'm going to try to find more of it. The bee skep is stitched with TGA's "Brandy," and I think it's one of my favorite overdyed colors. 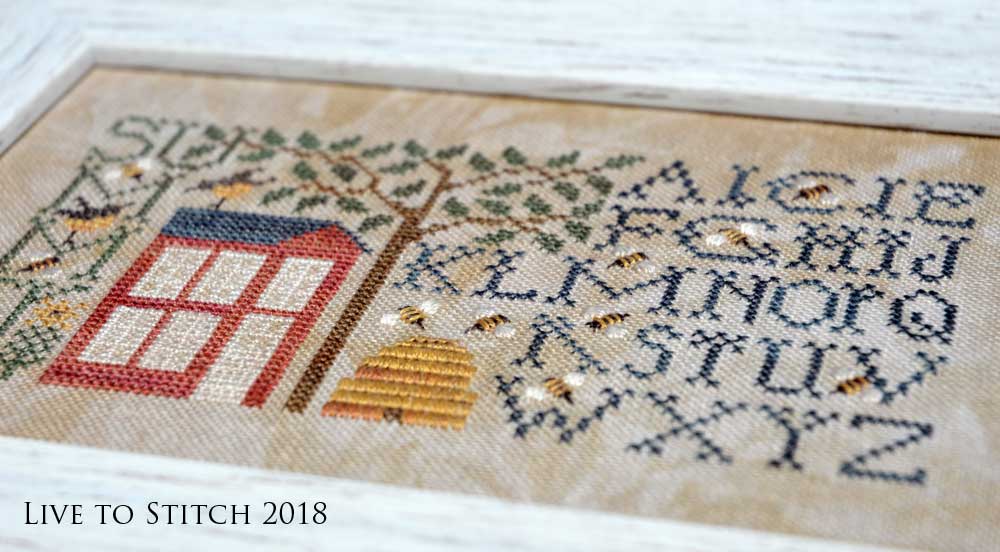 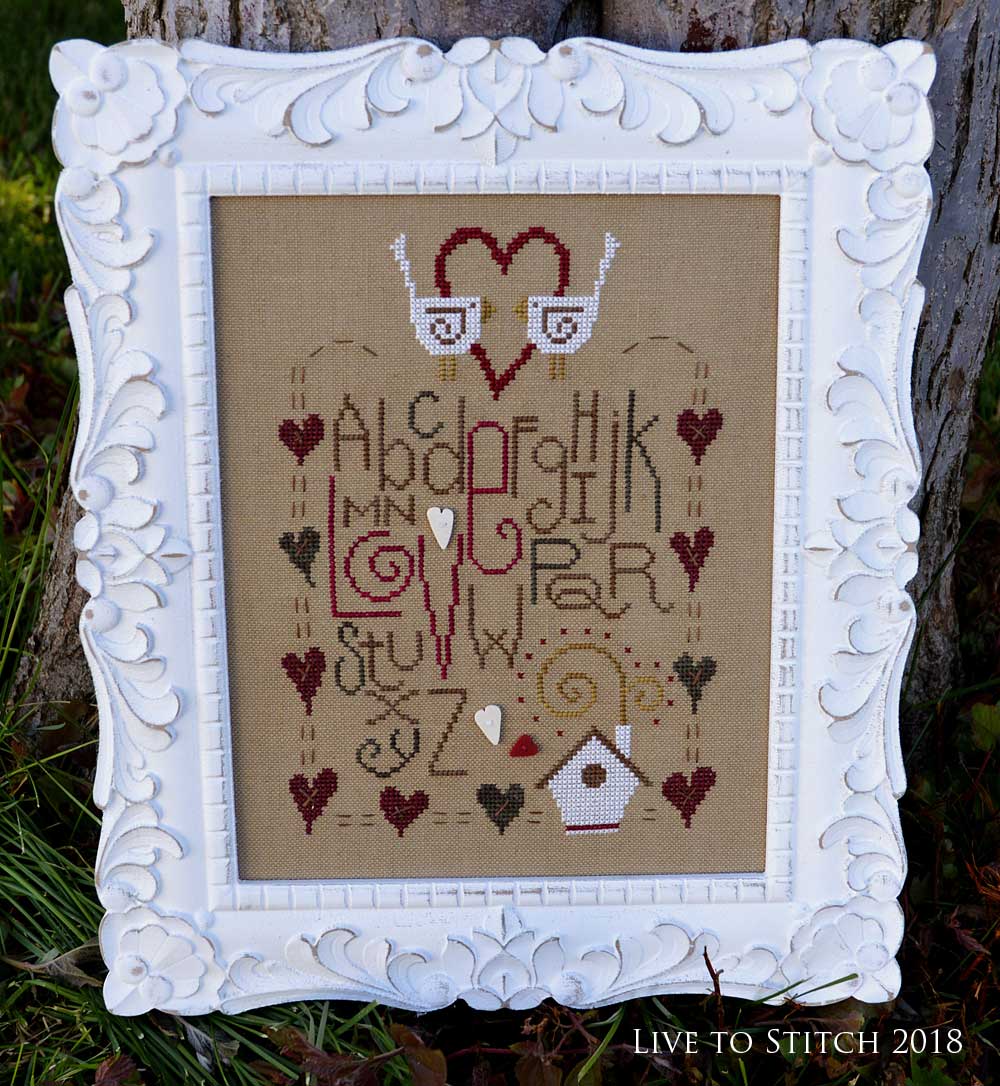 This morning, while Thomas was in his math class at summer school, I finally framed "Love" by Bent Creek. I stitched this last fall, but it has been sitting in my "to-be-finished" pile. (I know you have one of those, too!) I substituted cross stitches for the plethora of French knots in the big heart at the top (life is too short...) and used the called-for overdyed threads and buttons. I don't recall the name of the linen I used, but I'm fairly sure it's 32-count. I found this sweet frame at Michael's.

I realized recently that I should change the title of my blog from "Live to Stitch" to "Live to Sit." When I first started staying home, I was a flurry of energy, going from room to room, decluttering and cleaning. Then came the June and July from hell last year, when I got really sick, started really nasty chemo, and lost my way. It dawned on me recently that I have been sitting on the couch most of the day, which really is not a good thing. So my new goal is to start tackling my "to-be-finished" pile. When I frame, I spend a good deal of time standing, so that's a good start, I think. I'm not running marathons, but it's a lot better than sitting all day. 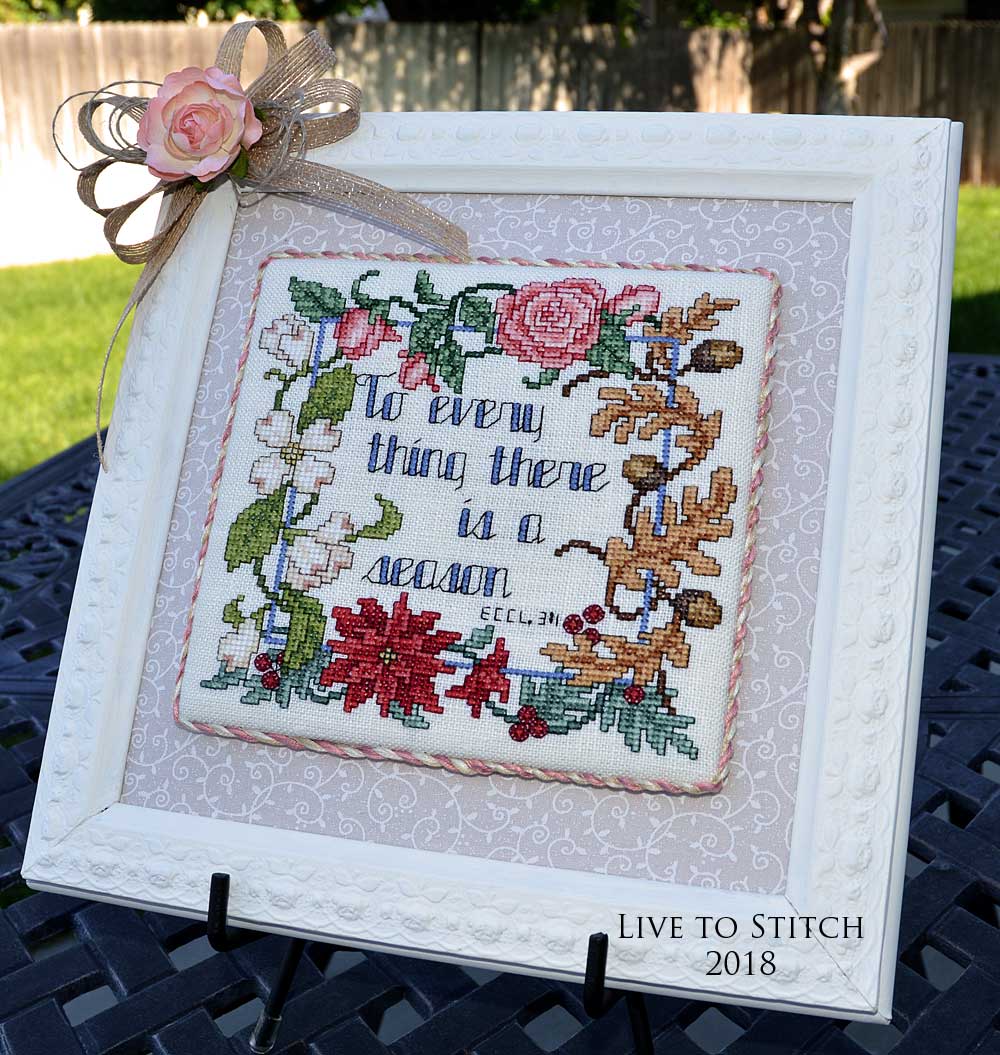 I stitched "To every thing there is a season" sometime last year or maybe even the year before, and it has been buried in my to-do pile ever since. The pattern came from a back issue of For the Love of Cross Stitch magazine, I think, but I don't recall the designer or the actual name of the pattern. If you know it, feel free to mention it in a comment.

My mom bought me a great selection of thrift-store frames. This frame was a pretty gold, but it was a cheap plastic and was coated in 20 years' worth of the previous owner's cigarette smoke and grease. After a good cleaning, I painted it with a couple of coats of white chalk paint. I mounted the cross stitch on foam core, attached some cording (not my best work, but *sigh*... don't get me started) and mounted that on fabric-covered Davey board. A natural-twine bow and a paper flower in the corner covered up a less-than-perfect frame corner. Do you like it? I'm thinking of giving it as a Christmas present. 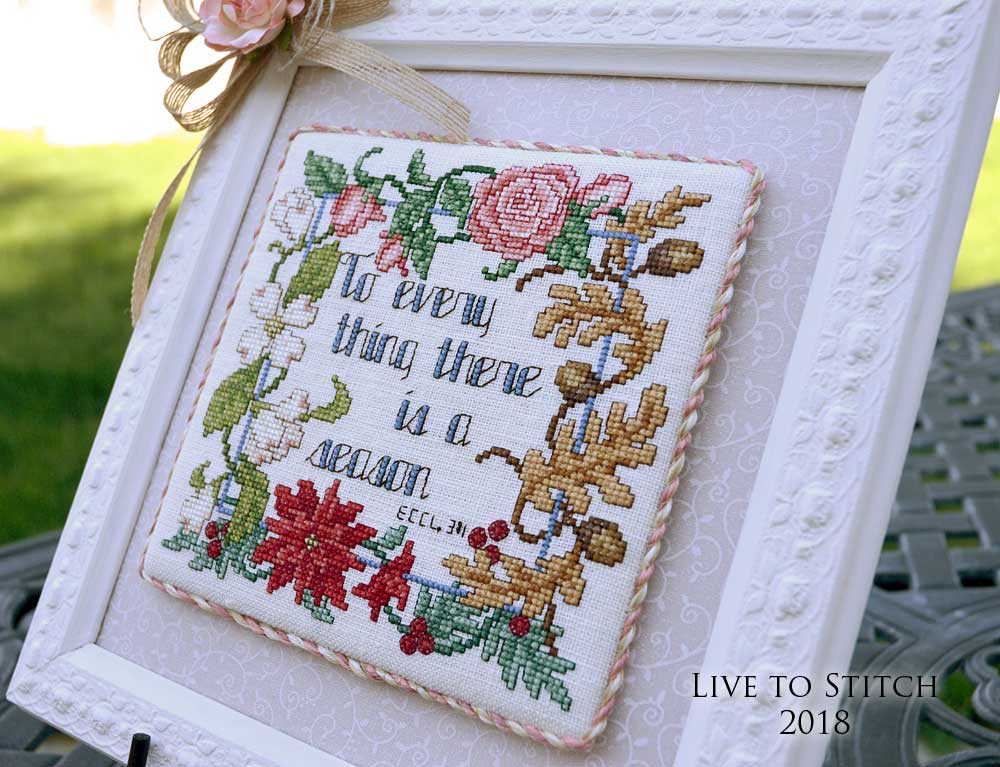 My brother in Colorado has been going through some very difficult challenges lately. I worry about him a lot. For his birthday in April, I asked him if there was anything I could send him to make life a little easier. "Just something you made," he said. He is so sweet. My mom and I pitched in and sent him some gas cards so he wouldn't have to worry about that, and I have been working on a project for him ever since. Reaching back into my to-be-finished pile, I found this stitch by D. Morgan that I had done 20 years ago (holy moly!) in 1998. It came from a back issue of For the Love of Cross Stitch magazine, but I don't recall the date. It just seemed perfect for him.

I mounted it on foam core, added some handmade cording, and mounted it on a simple wood box I bought at Michael's. To finish the box, I sanded it (and sanded it and sanded it!), then painted it with gray chalk paint. Then I sanded it some more and painted one side at a time with Elmer's glue. When the glue was tacky, I painted white chalk paint over it. As the glue dried, it shrank, revealing the gray paint underneath and giving the box an aged look. 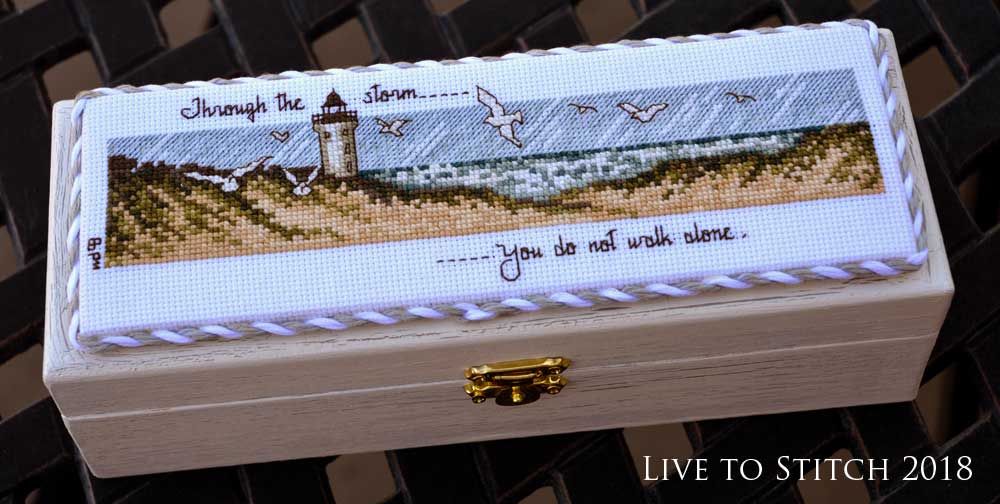 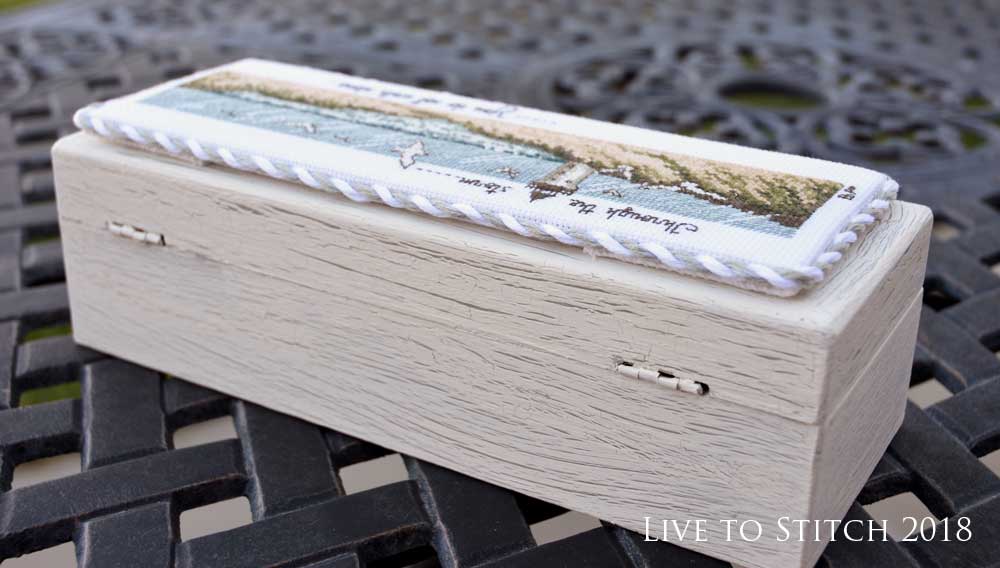 I love how this turned out! My brother has been building a tiny house, so I thought this little box would work better for him than something he'd have to find wall space for. 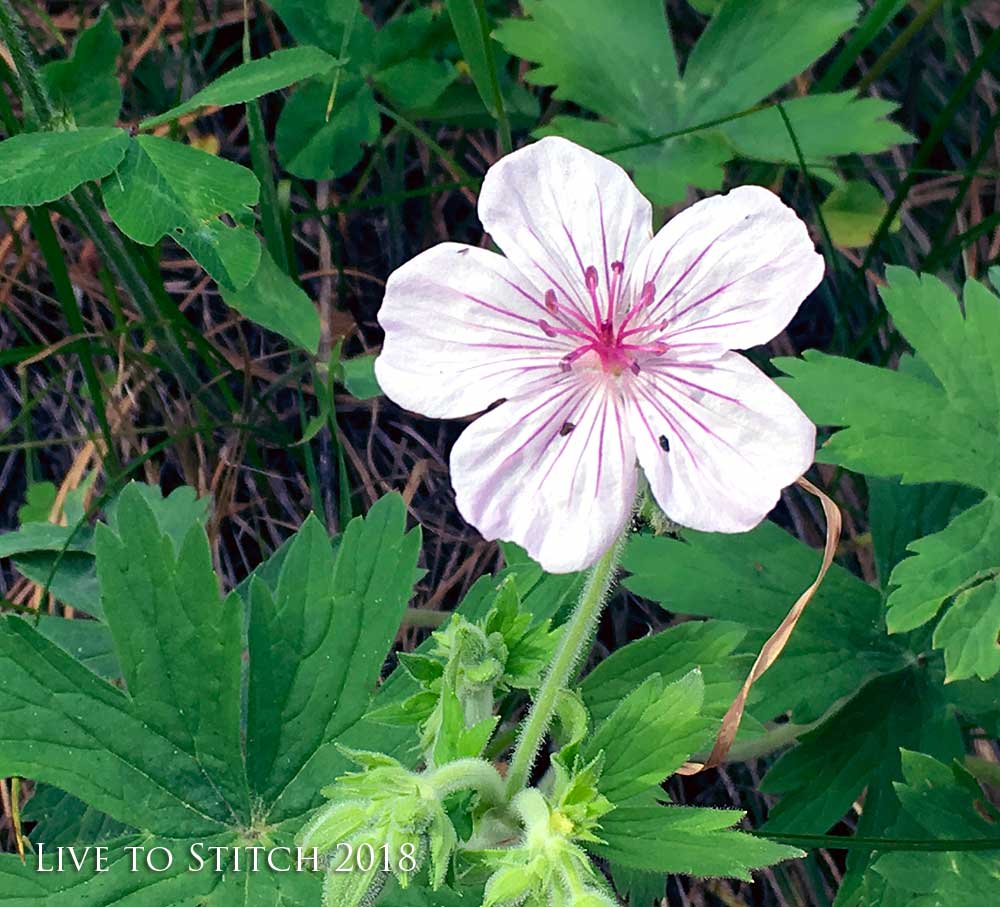 A couple of weekends ago, we went with our good friends Rob and Kristin to their family cabin in Crouch, Idaho. Rob loves to explore, so he piled us in his pickup and took us to Placerville, Idaho, a ghost town. I'd never been there before, so it was a great adventure! Placerville has a population of 53, but in its hay day in 1863, the population was 5,000! A fire in 1899 nearly destroyed the entire town. Several buildings were rebuilt, but 10 months later another fire burned many of those as well.


The coolest part of Placerville, in my opinion, was Pioneer Cemetery on a hill above town. 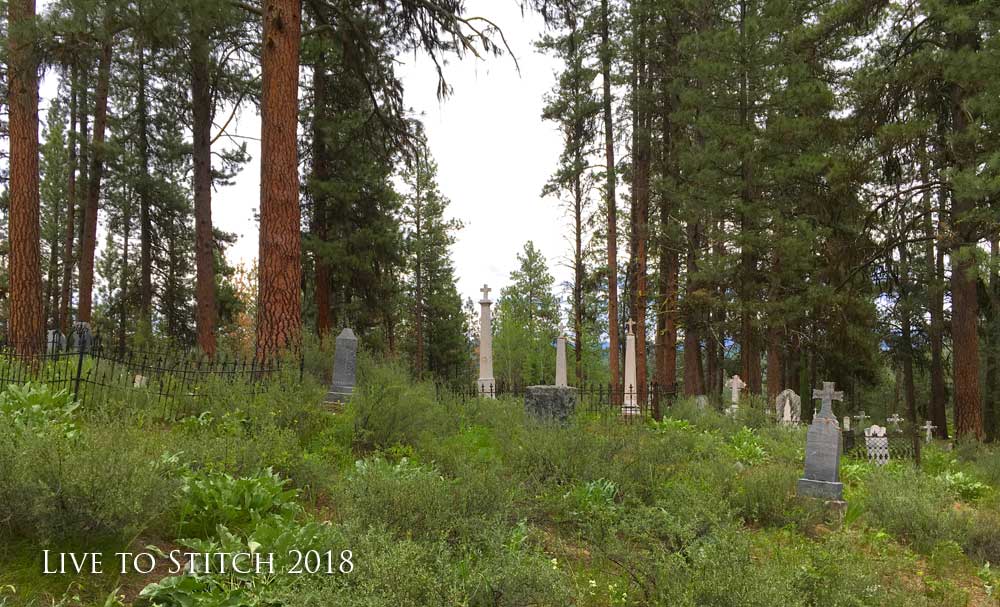 The cemetery is a hodgepodge of some of the most unique and beautiful headstones I've ever seen and newer headstones - as new as June 2018. 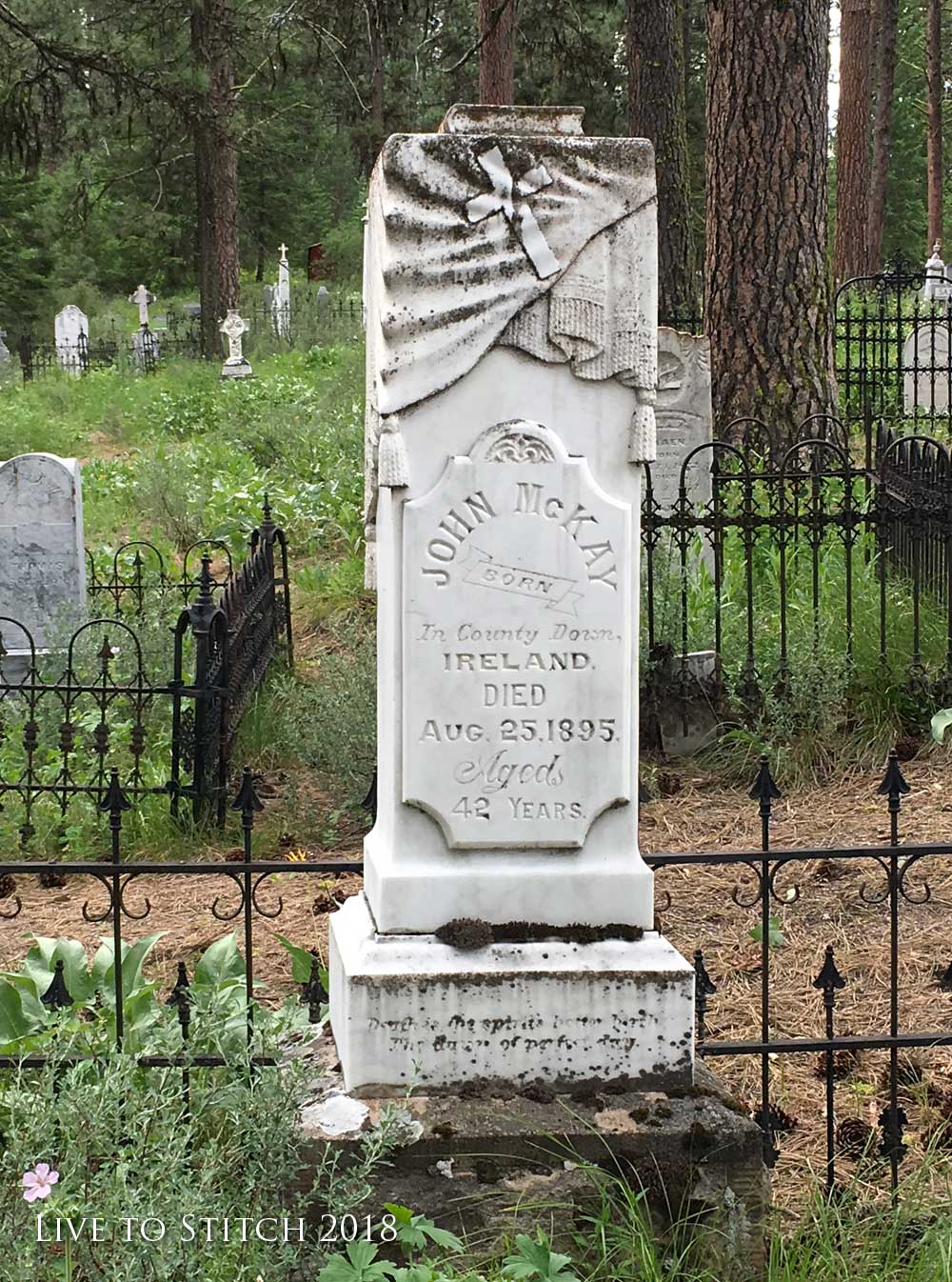 Many of the residents buried here came from Ireland and Scotland. 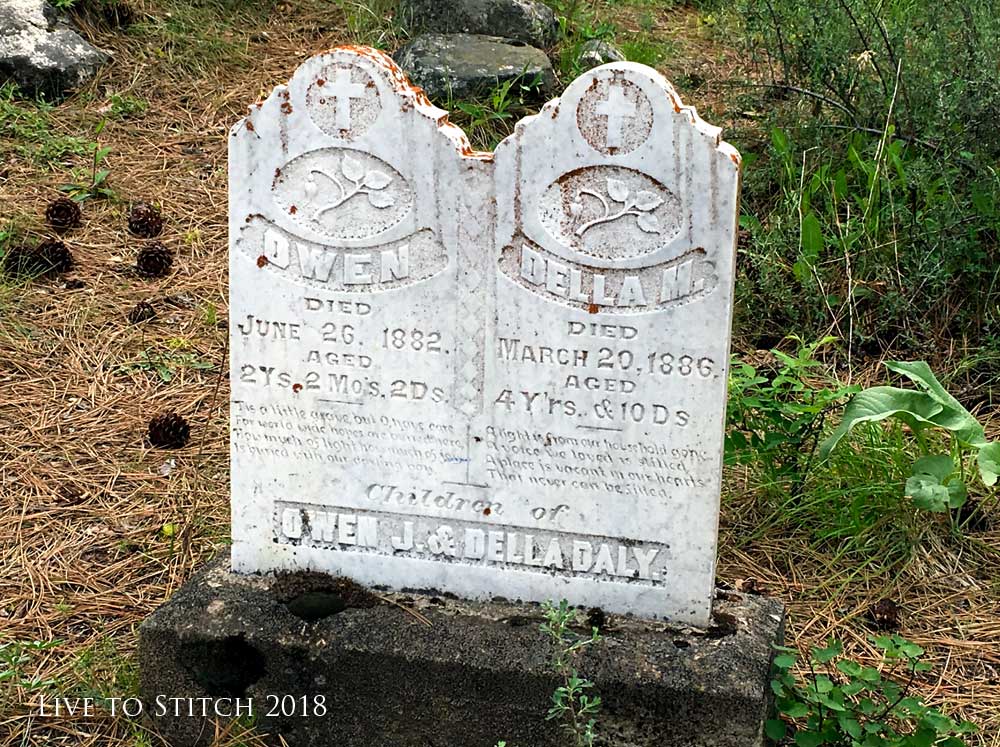 We saw far too many graves of children. Life in Placerville in the late Nineteenth Century must have been very hard on families. 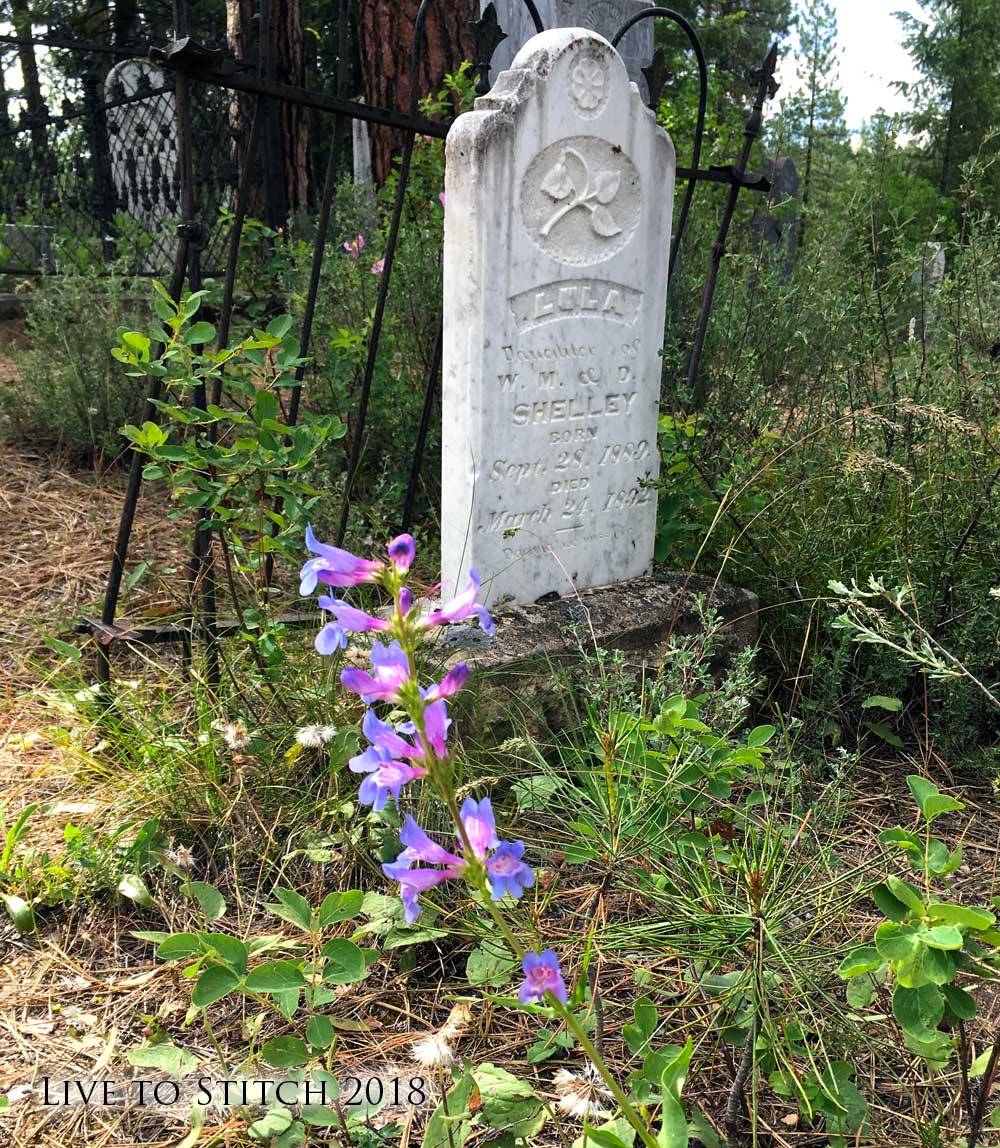 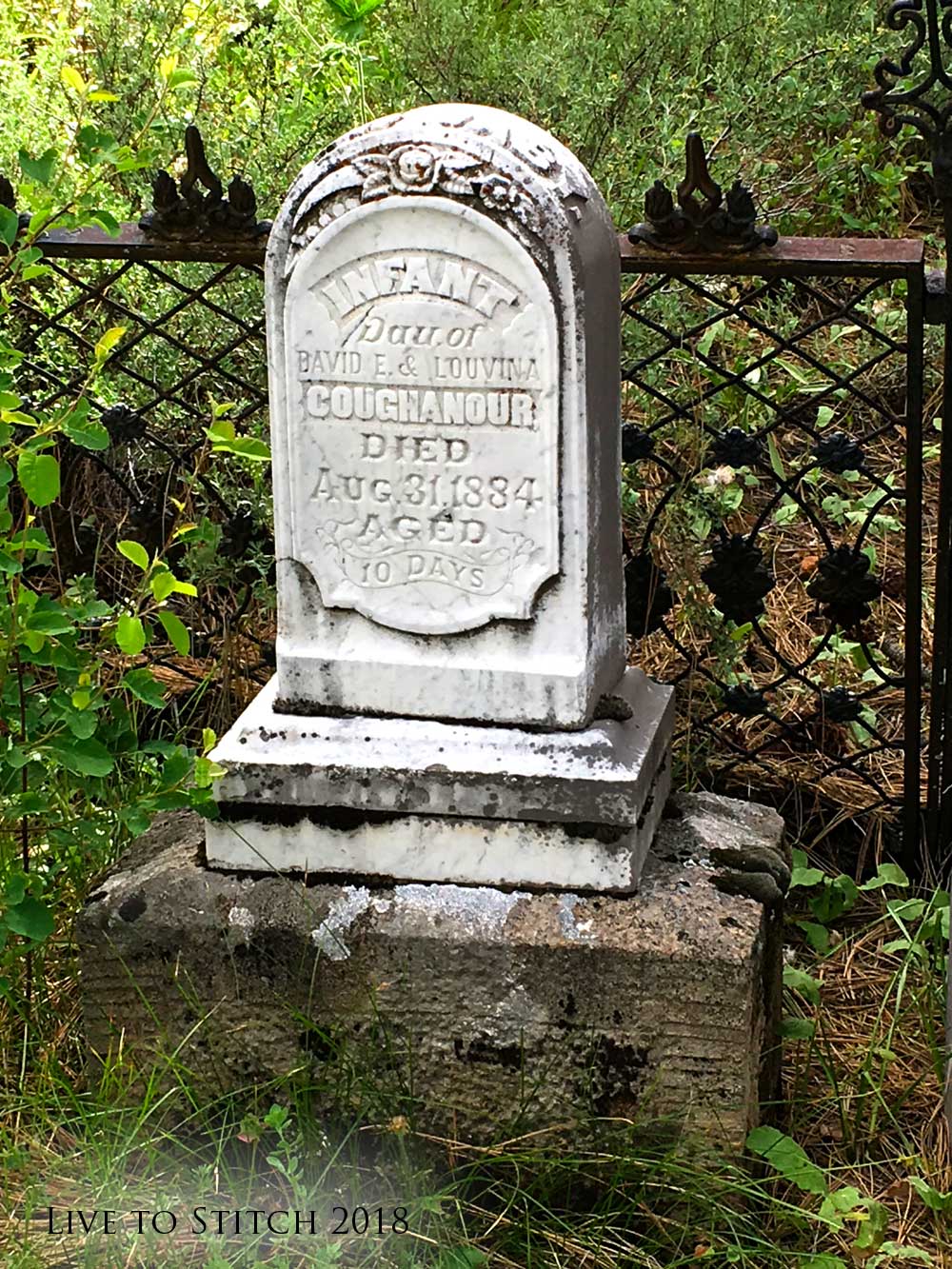 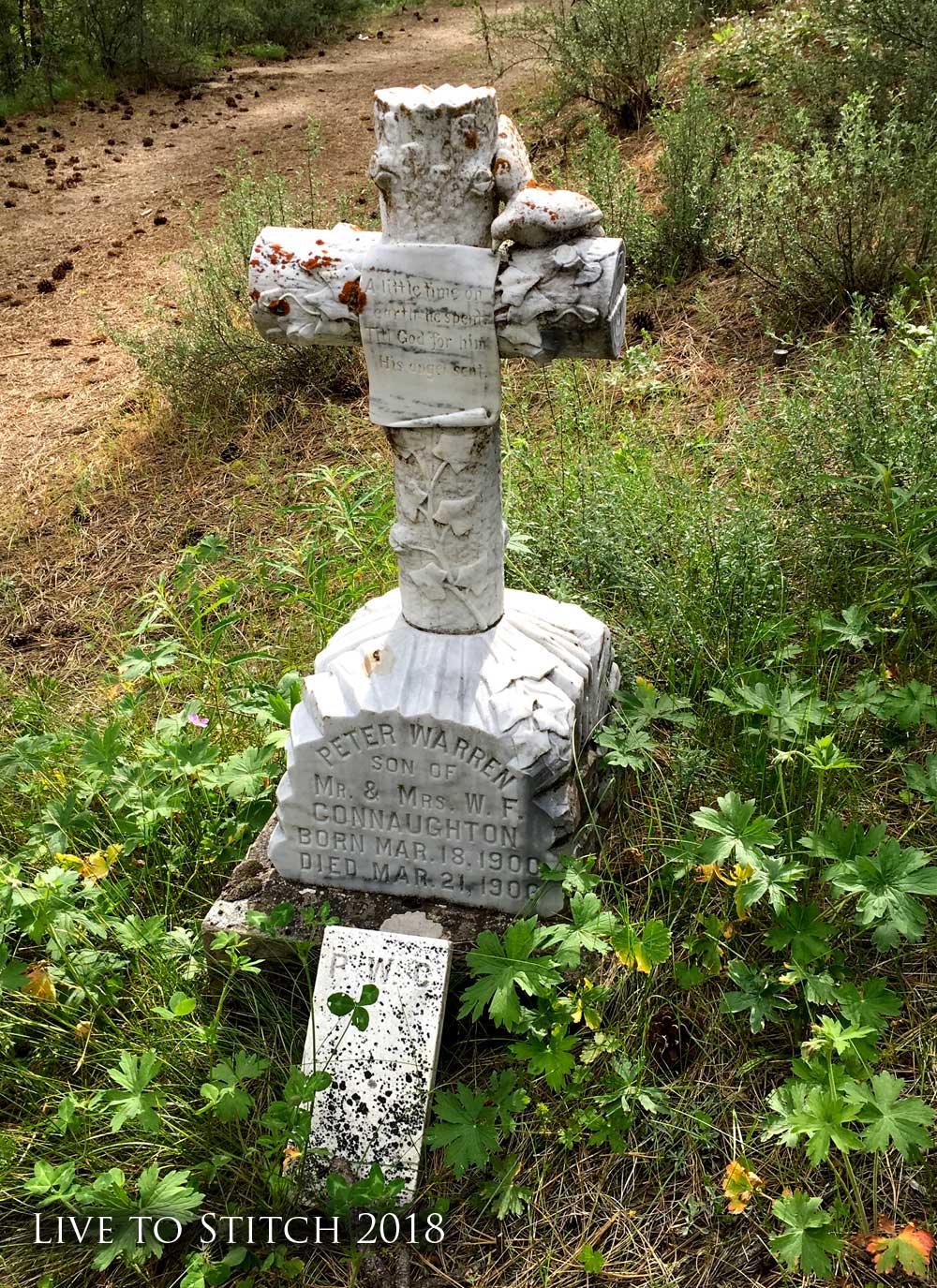 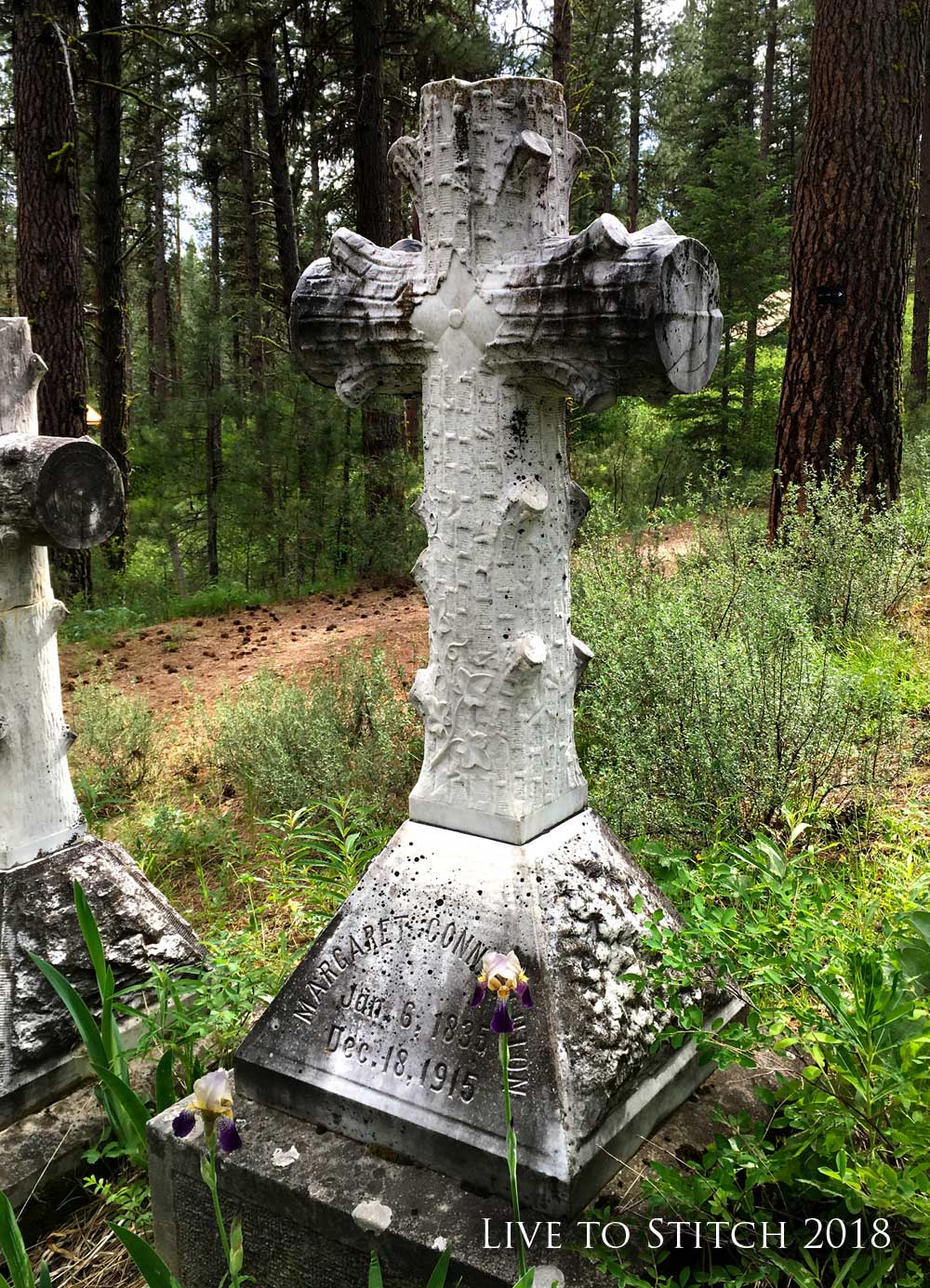 These crosses that were made to look like wood were stunning.

That's it for now, dear friends. I hope to post again soon and share with you some things that have gone neglected far too long!