Oregon Coast, April and a Freebie!

First, before anything else, I wanted to share with you another little pattern I designed. I know Valentine's Day was SO yesterday, but this is more of a love note to my husband and my son. It is for every day. I wanted to design and stitch something to show them that no matter what happens, I will be in their hearts. You can get the pattern here.


We're back from our Oregon Coast vacation, and I am just now starting to feel like myself again. We had a wonderful time with our friends Rob and Kristin, and we toured, ate, shopped, ate, walked on the beach, ate, and relaxed. And ate. But after just a few days of go, go, go, I was zonked! 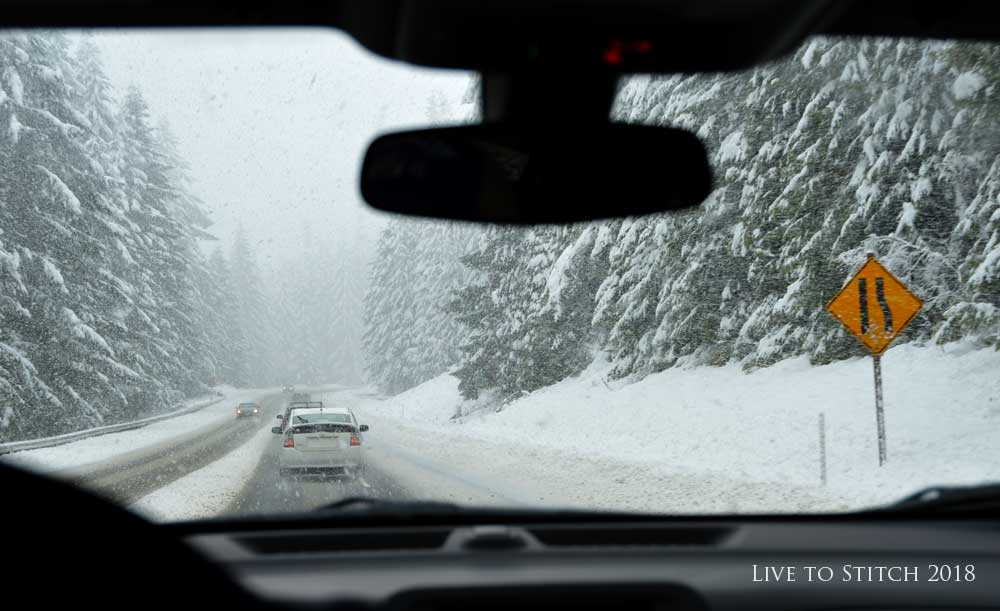 When we left Portland and started our drive to the coast, we were hit with a huge snow storm! We left Idaho to get away from the snow! It was bad for just a couple of miles, though, but we did see someone stopped in the middle of the road putting on chains. Quite the overreaction, and definitely not safe. Rob did the driving, and he was a champ.

One of our first stops was Canon Beach. Some lovely beach photos.... but it was SO friggin' cold. We had rain every day except for a couple of hours one day. I'm glad I brought a hat, scarf and my wool coat.

On the way down Highway 101, we stopped at the Tillamook Cheese Factory for ice cream. Then, just south of Tillamook, we spotted the huge air museum (rather hard to miss, as you can see in the photo). The museum is housed inside a blimp hangar that was built in 1942. It's 15 stories tall and covers more than 7 acres inside. You could have 6 football games going on at once inside.


I loved the drive along Highway 101. There were so many beautiful, old barns, and the daffodils were blooming everywhere - in yards and in the forest. One of my favorite things to see were a couple of free-range chicken farms. Chickens everywhere! Cluck, cluck, cluck!

After a long day of touring, we checked into our condo in Depoe Bay. Our view was amazing! We watched the whale-tour boats go out every hour, and while we did not see any gray whales up close, we could see them spouting about a half mile out.

The other lighthouse in Newport is Yaquina Head Lighthouse, built in 1872. It took more than 370,000 bricks to build! It is still operating today.

We went for a long walk on Nye Beach, and we found something.... 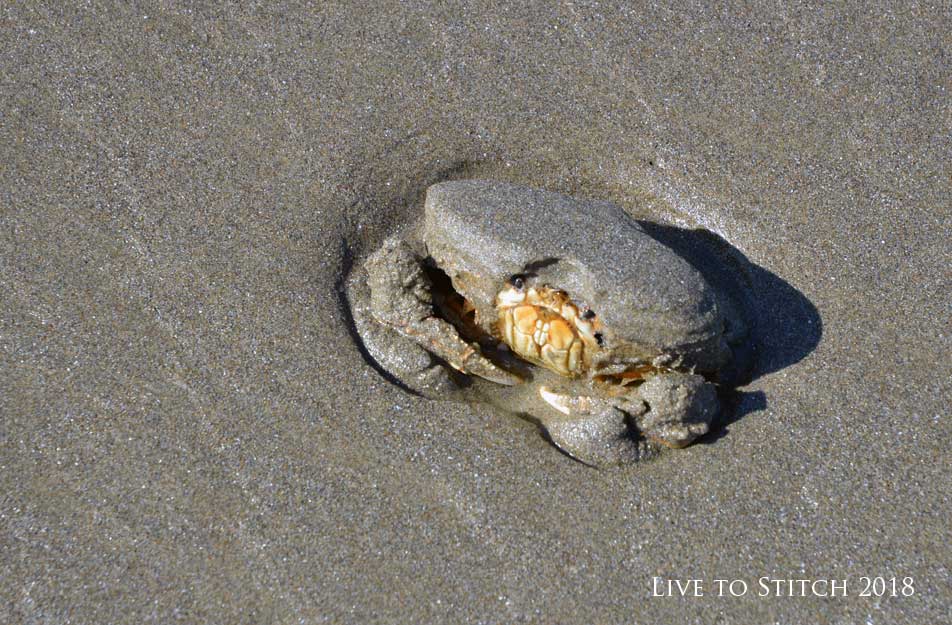 Poor little guy washed up on the beach during low tide! He looked so sad and helpless (and a little gross), pleading with us with those beady little eyes to help him. I think I heard him say, "Don't eat me!" I wasn't going to touch him, but Rob wasn't afraid. 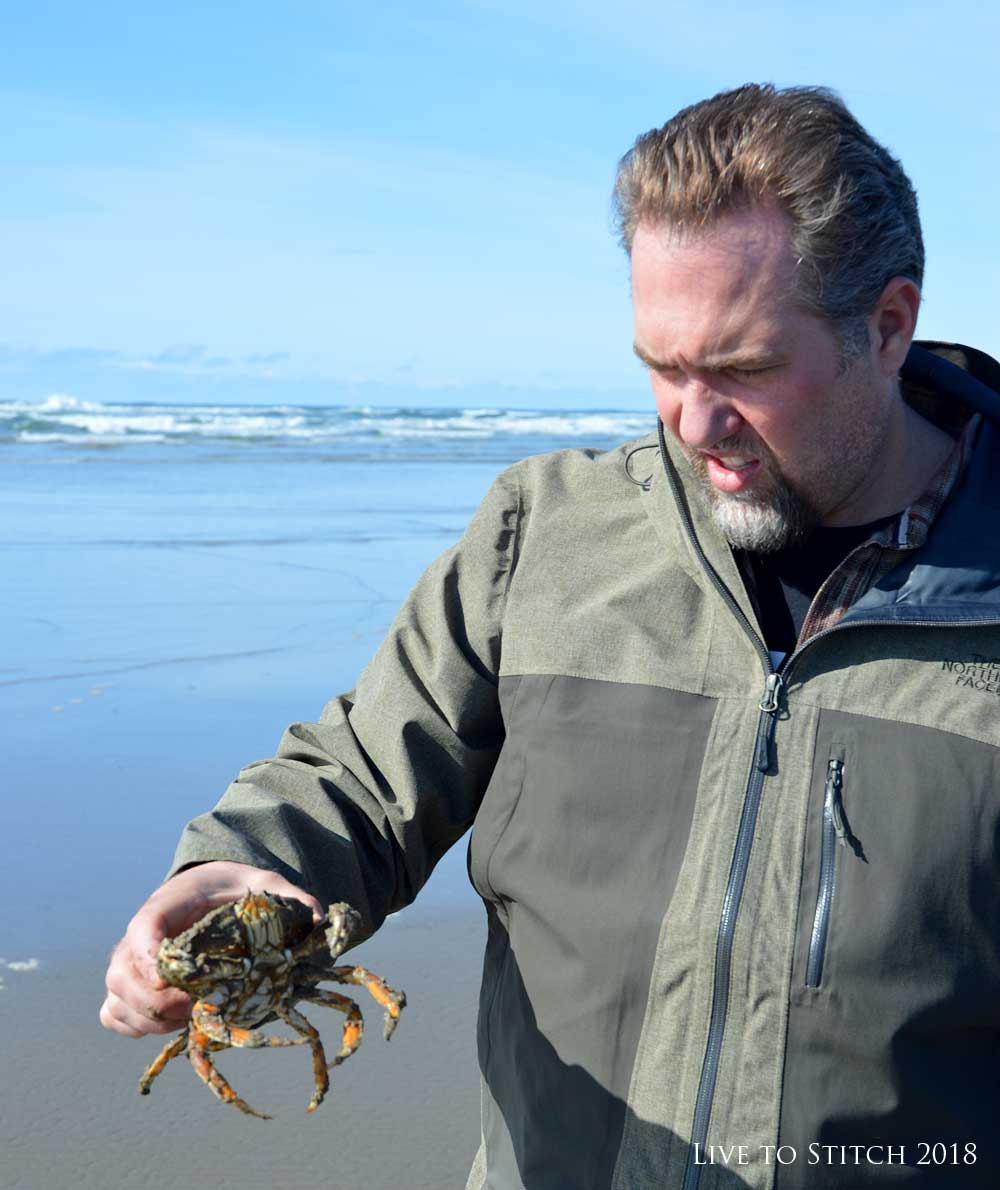 As soon as Rob picked him up, he came to life (and thankfully didn't pinch Rob). 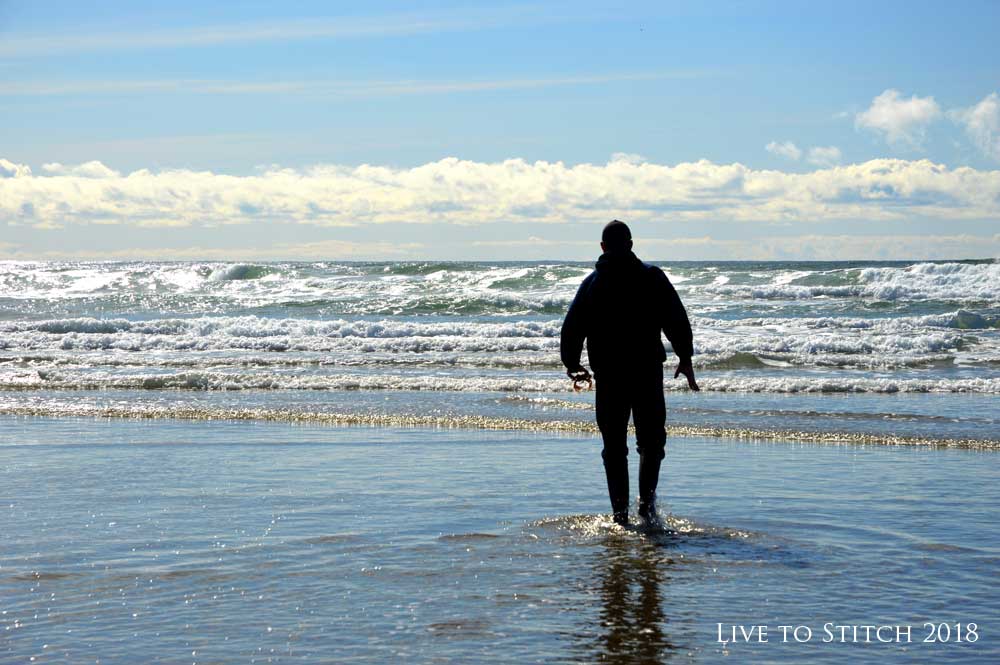 Shawn, my husband, is such a big softie, that he walked the little fella out into the waves. I kept hollering at Shawn to get back - one of these days my dear husband is going to be swept away by a wave, I just know it. But he is stubborn! He saved the little crab, at least for another day.

On our way back to Portland, we stopped in Corvallis so I could visit Friendship Crossing, a cross-stitch store recommended to me by sweet Beth, a friend I've made through this blog. The shop was heaven on earth, and the owner, Ann, was so sweet. I could have spent the entire day there. Shawn promises me that it will be a regular stop on future trips. Yay!

Since it's finally spring (hooray!), I finally got around to framing a spring piece I finished last winter, while I was dreaming of spring. It's "Simply Spring" by The Drawn Thread. I stitched it over two on the recommended fabric, with one thread, and I have to tell you, that was a weird experience for me. I'm so used to stitching over two with two threads. I wasn't sure I liked it at first, but now I do. I picked up the perfect frame on Amazon. What do you think?

The little buds on the tree are made with satin stitches.

While we were in Oregon, I spent a lot of time stitching the April cottage from Country Cottage Needleworks. When I got home, I realized that after stitching the parallelogram (math!!!) part of the roof, I had somehow turned my fabric 180 degrees and stitched the cottage upside down!

I had stitched the entire cottage and the tree before I realized my mistake (I was getting too close to the edge of the fabric - that's when I noticed). I had to take out all the stitches except for the roof and start again. That took nearly three hours (just pulling out stitches). Three loooong, hard, heartbreaking hours. I rinsed the fabric in cold water and pressed it to remove all the holes where my thread had been, and I started over.

And you know what? Several more times I made mistakes that required a lot of "unstitching." For a simple design, this thing sure threw me! That shows you how tired I was after our vacation.


I love that little bunny!

When I learned to cross stitch, I was taught to start in the middle. I notice that a lot of you start in a corner. Were you taught that way, or did you change at some point? If I had started in the corner, I would have saved myself a lot of work!

Happy April, stitching friends. I have another design in the works that I'm anxious to show you. It's a Christmas ornament, and I think you're going to love it. Until next time... Happy stitching!
at April 06, 2018